We have a nice working relationship whenever we’re driving around France. Or indeed, anywhere. Karen looks out the windows and yells for me to stop, and asks why I didn’t see “that,” whatever that may have been.  I respond by telling her I was busy keeping us from being killed by oncoming traffic. And so it was that we discovered the sign on the road into our village of Luche-Pringe.

Wherever you go in France you will find signs and markers about stuff that happened there. Lots of stuff happened and there are lots of signs. We’re living in what was the literal back yard of the Plantagenets. Henry and Eleanor of Aquitaine were all over the place here. For all we know, Eleanor shopped at the epiceries here in the village. Who knows?

Thus it was no surprise to discover the sign on the road into the village, which says the following: 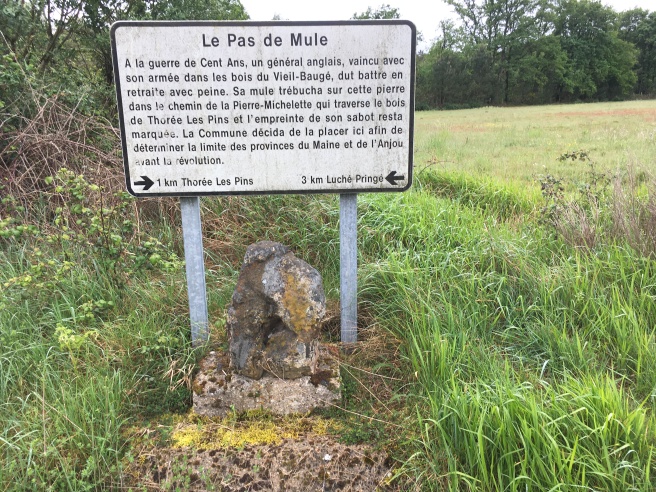 In the Hundred Years War, an English General defeated with his army in the woods of Vieil-Bauge had to make a fighting retreat. His mule stumbled on this stone on the road to Pierre-Michelette that crosses the woods of Thoree-Les-Pins, and the imprint of its hoof remained. The municipality decided to place the stone here in order to indicate the boundary of the provinces of Maine and Anjou before the Revolution.

Alrighty then. Sometime between 1337 and 1453 a mule stumbled on this rock, this here rock, and left a mark on it. Right here. This rock.

It just seems to raise so many questions. Like, “Really?”

I wonder if there’s a guy in local government whose job is to replace the rock when it gets stolen. Because I wonder how many college dorms around France have a student living there with the rock that the mule tripped over.

“Hey Jacques, while you’re out today, find another replacement for the rock on the road to Luche. We had another one stolen last night.”

2 thoughts on “The Village Has a Sign. And a Rock.”