It is astonishing to realize that France is only about 80 percent the size of Texas, but within that relatively small piece of real estate exist a variety of landscapes, vistas, forests and plains, towering mountains, and raging rivers to rival the United States.  Then there are  the historic sites that go back as far as the Neolithic age.  It is all packed within an area smaller than Texas. It is all relatively close, wherever you are. And that means everything is within striking distance for a road trip.

Road Trip! That’s what we do. It’s what we have done since the very beginning of our time here in France. We pick out a target, which might be a specific place, like Omaha Beach in Normandy, or we just pick a specific region, like the Jura, then off we go. My motto is, “I ain’t scared. I got gas!”

There is a region of France called the Tarn, where the Tarn river has, over millennia, cut deep, vicious slashes into the earth; gorges lined by sheer mountain cliffs that fall off a thousand feet or more into the river below, a river with sections of raging white water where canoers and rubber rafters play. A thousand feet above the water, hard by the sheer cliff walls, the Tarn river gorges are rimmed with a narrow road, narrow even by French standards. Narrow enough for one and a half cars to pass. Narrow enough for one Winnebago. Barely.

Driving along the Tarn river gorges is a quite unfair proposition. On one hand, Beloved Wife gasps in amazement at the stunning beauty of the landscape, the incredible beauty and the stunning site of the deep gorge and the river far, far below. She gasps in awe, her mantra, repeated over and over, “Oh, wow! Oh, that’s amazing! Oh, look, at that!”

Meanwhile, steering wheel clutched in a death grip, eyeing the edge of the road and the cliff just inches from the wheels of the car, in terror at the prospect of falling into the river far, far, below, I gasp as well. I keep telling her, “I can’t look at the scenery, I’m trying to keep us alive!” while praying there won’t be a car coming at us from the other direction. That’s when the Winnebago showed up.

Yep. Coming our way on this narrow thread of road, cliff walls to the right, drop off to death to the left, around the bend ahead came a Winnebago. My second thought was, “What manner of person in their right mind would try to drive through this gorge in a Winnebago?” The first thought was, “Oh shit.”

I was genuinely terrified. For a moment, I didn’t have a clue what to do. It was a Mexican standoff. I couldn’t go very much forward, the prospect of backing down this winding, narrow strip of road was too frightening to contemplate, and it was clear that the lunatic in the Winnebago wasn’t going to back up. Even Beloved Wife took a break from enjoying the scenery to join me in a chorus of “Oh shit.”

Salvation came when we realized, for the first time, that the road builders had thoughtfully chopped out small depressions in the cliff wall, large enough for a car to take shelter  (but certainly not for a Winnebago).  Both of us, Winnebago guy and me, spotted one such refuge mercifully lying between us, and I crammed my car into it as he edged past. At least, parked for a time in that nook, I was able to take in some of the scenery.

That is what driving through the Tarn is like, but that is not what brought us to the Tarn. We targeted the Tarn in order to see a bridge. Now, the idea of a road trip to see a bridge may not sound like the most exciting idea in the world, but this is not just any bridge. It is the Millau Viaduct. 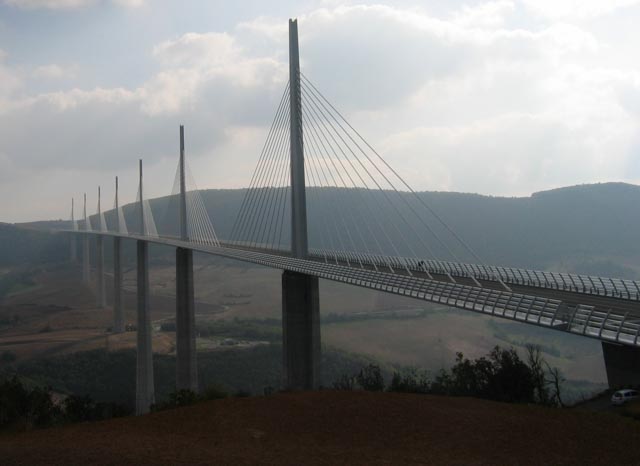 It is the tallest bridge in the world, spanning the Tarn valley in southeastern France, along a highway that connects Paris and environs with the southeast, Province, and the Mediterranean coast. It is called The Bridge Above The clouds, and it is worth the trip.  The sight of it will make you gasp; it is spectacular, beautiful, and breathtaking

Alas, the clouds picture is not mine. We didn’t have a helicopter available….

Ironically, I thought it would also be terrifying to drive over, but you’re so high you can’t see anything but the road ahead of you, and even Madame Sightseer said there wasn’t as much of a sense of height as she expected. But when you are off the bridge and looking at it, well, the pictures tell the story. I think it’s fair to say that the Millau Viaduct is something once seen, never forgotten.

6 thoughts on “The Bridge Above The Clouds”