My wife is a Chef.

Oh, she will demur and say something like, “I’m not a chef. I’m a good household cook,” which is like Mario Andretti saying, “Ah, I just like to drive fast.”

The lady can cook. She thinks about food, reads about food, and routinely turns out restaurant quality meals here at Chez Nous. We will frequently have a dish at a restaurant that we’ve never had before, and after contemplating it, she will announce, “I can do this.” Within the week the same dish will appear on our dinner table, along with her obligatory apology for presenting me with such swill. It’s the way she operates. We have friends who are top notch professional chefs, and she cooks with them for fun, as an equal in the kitchen.

When we first began to visit France, and for a number of years, we spent our time traveling like vagabonds, going from bed and breakfasts to logis, from here for lunch to there for dinner, rarely ever spending more than a single night at the same place, driving all over the country. Almost from the beginning, and especially whenever we came across one of the town markets that are so much a part of life in France, Beloved Wife would wax poetic about how nice it would be to have her own kitchen, to shop for produce at one of those markets, and to cook with the quality of ingredients that are available here in France. Sigh.

Then one day it happened; a kind of miracle. A long-time friend of Karen bought a small cottage in the south of France in the region called the Languedoc, and it became available to us to rent, almost whenever we wanted which, it turned out, was whenever we had vacation time.  For the first time we would have a place to stay for a few weeks; a place to call “home” and a base of operations for our ongoing road trips. But mostly, it gave Beloved Wife her first opportunity to cook in her own kitchen in France.

The French tend to name their homes, and for some reason it doesn’t seem as pretentious as people in the US naming their places. This cottage was called simply enough, La Petite Maison, which is The Little House. It was located on the outskirts of a tiny village in the area called the Aude. It is what we call a “railroad house” because it was at one time the home of the railroad employee who worked there and his family. There are houses like this all over France, all looking much the same. The story goes that when the rail lines were shut down and many of them turned into bicycle and hiking trails, the railroads gave the houses to the employees who had lived in them. That’s how they got into the market. Today, almost everywhere you go in France, if you look you can spot them. Some look a bit dire, but many of them are well maintained and look quite charming. Such was the case with La Petite Maison.

It opened up a new world of adventures; cooking in a telephone-booth-sized kitchen, converting temperatures from fahrenheit to celsius, shopping in a French grocery store, reading labels, deciphering cooking instructions (if the package says “C’est facile!” avoid it), even negotiating the purchase of produce from the greengrocers at the local market when none of them spoke a word of English, and we didn’t know the French words for certain vegetables. All the little protocols that go into daily life, that you never encounter as a tourist, suddenly rear up their ugly little heads when you try, if only briefly, to live a normal, settled existence.  It was challenging, but it was fun.

There are moments that I will always remember and treasure from our times here. One of them was that first evening, cooking that first meal in “her” kitchen. My beloved wife is not an easy smiler, but I have seen her smile spontaneously more here in France than anywhere.

Cooking that first meal in a French kitchen

She was so enthusiastic about cooking in our vacation cottage that we invited a British expat couple in the next village to come over one evening for a bite to eat. They accepted, with a mention that “apero” would be fine. At the time, we didn’t know that apero means light snacks, a drink or two, maybe something salty, a bit of cheese perhaps. Karen was having none of that. She unloaded with both barrels. When Mike and Lynn (who had earlier described a more elaborate apero they had been served by a French friend) arrived expecting a simple apero, Karen presented them with course after course of full-blown dinner. There was a Spanish torta, pan-seared fois gras with home-made fig confit from trees in the garden, and the dishes just kept coming. They were, as the Brits say, gobsmacked.  By the end of the evening even she was having second thoughts, and as our guests left she said to me, “Do you think I overdid it?”  For dinner, no. For apero, well maybe….

In the years since, especially having been embraced by our French family here, Karen has gone through quite an evolution. The first time she was faced with cooking for French women she was genuinely unsettled. Everyone knows French woman are excellent cooks, routinely turning out four-course meals for ten on a bunsen burner, and she didn’t want to be embarrassed. Oh, she was mightily intimidated. She shouldn’t have been.

Almost immediately, from the first time she prepared anything for our French family and friends, she not only established herself as a woman who can cook, she earned their respect. They started shamelessly asking for recipes, which, while a badge of honor to an American woman, was also a problem as Karen doesn’t use recipes much, and had to convert all of her ingredients and cooking temps to metric amid much grousing to anyone present, which would be me.

I confess that seeing a burst of genuine happiness in Karen brings me enormous joy and gives me genuine happiness, she not being an easy smiler. And so it was, living in that cottage in the Aude in the warmth and quiet of the garden, a book in one hand, and a glass of wine in the other, I caught a moment when the smile was oh, so very real, and it makes me smile too. 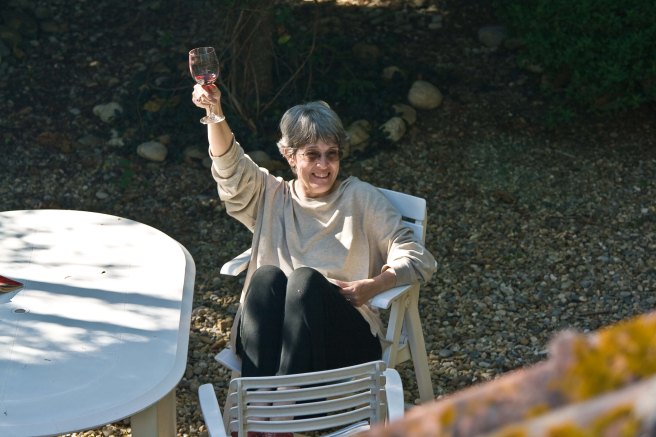 10 thoughts on “The Joy of Cooking”